Hi there – sorry it’s been so long.

I’m staying with a pal in Bury and today we’re taking the train over to Liverpool (my first ever visit) for a day and night whiz round. I’ll take the camera and try and get some good pictures.

It’s been hectic and I seem to have got lazier at updating my blog recently but you’re not forgotten!!

Next week P and I are off to France to the barge we stayed on before (he works on the boats and I get to go along sometimes).

Well on the weekend we helped arrange a party at Cropredy instead of the scheduled African Linx mini-festival we’d intended to do as there wasn’t enough time or money for that.

Poor Peter was hitching up the electric mains when he somehow fell backwards on to the path and landed on his back on a big earthenware flower pot and cracked a few ribs. We spent the afternoon in casualty and in the evening he sat dosed up with drugs to the eyeballs to watch the entertainment instead of joining in.

I’m now trying to get him to rest for a few days while the ribs heal up – not easy as he’s a very active guy!

We played a set of sabar drumming and I sang a few songs as well but my fingers were so cold I could hardly play the guitar and I was glad when they put the reggae music on!

Just back from a great couple of days with the van at Halesowen – just south of Birmingham. We went to play drums for their evening party and we had an all day workshop at the same venue beforehand.

We had the same teachers we’d had at  ABC so it was brilliant.

The evening party was great -though unusually for me – I got very sloshed. Everyone let their hair down and danced their socks off to a load of 80’s music after our drumming and a live band.

The only hitch was my van got stuck in the mud getting out and luckily, just when I thought we’d have to get towed, I managed to get her out somehow.

P’s just gone off to London working till Friday and I’m going to use the time to finally set up my music studio here which I still haven’t done since moving in May! I hope I’ll feel inspired to write some new songs and get recording again!

I don’t know where to start trying to write up the ABC event which is now finished.

A small group of us has been involved in organising it for a few months and at last the time came for the actual event to happen. We got to the site on the Sunday and the participants were going to start arriving on the Tuesday afternoon so they could set up camp, get sorted into the right level groups for drumming and start workshops on the Wednesday morning.

There were about 150 people booked in and it was an enormous amount of organising – the site, toilets, put up shower curtains, mark out fire lanes (had to have a 25′ access way round the whole site in case emergency vehicles were needed), programmes and schedule, crew schedule, put up an outside sink and tap, caterers, sort out the African artists’ camping arrangements, information tent/reception area, car park field next door, rubbish and re-cylcing, you’d never believe how much toilet paper 200 people need for a week,  warn the neighbours about the noise and invite them, evening entertainment and running order – just to get started – oh and not to forget TO HAVE A BRILLIANT TIME!!!!! The organising team (about 7 of us) and the crew were brilliant. The workshops were brilliant. The evening performances were – yes you guessed it – BRILLIANT.

The drumming, dance and song workshops were two days on, one day off, two days on with three or four a day you could attend. The camp was for intermediate and advanced drummers only (no beginners) so the standard was exceptional. 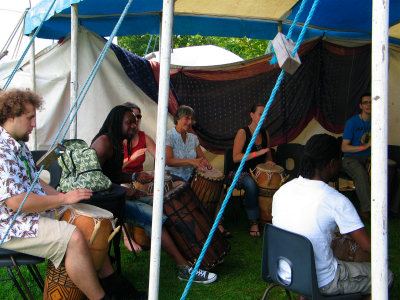 We had the cream of the cream of African teachers – world class performers and on the last night all the teachers got together to do a joint performance that I’ll never forget till I die!

On the day off we had demonstrations of African cooking, drum-skinning etc and it was good to have a more relaxed day in the middle.

I’ve put up photos on Facebook and there are link to some wonderful albums for those who are on Facebook they’re well worth looking at.

Really, this is only a snapshot of the week – it was such a good experience though I’m exhausted. I’ve been working on feedback forms and there are some things we’d have to change a bit if we do it next year but nearly 90% said they’d come back and had a wonderful time! 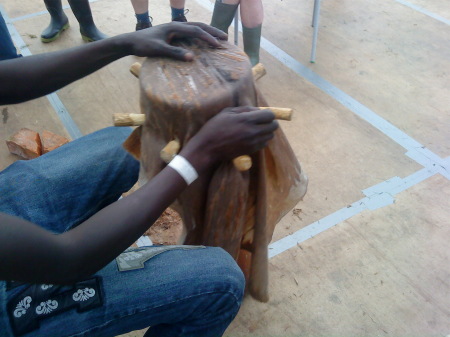